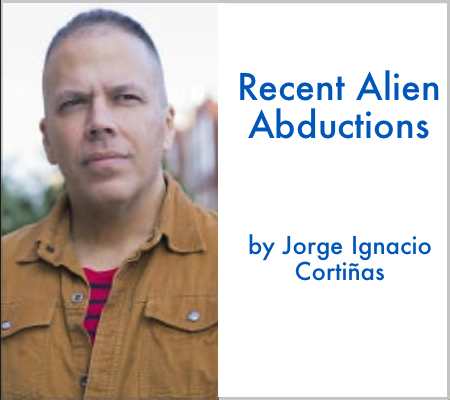 FROM THE SLEDGEHAMMER SERIES


Álvaro is certain that an episode of The X-Files he saw while growing up in Puerto Rico has been mysteriously altered since its broadcast, but no one believes him. A darkly compelling tale about the dread of having no one to trust, Recent Alien Abductions uses the metaphor of alien abduction to explore two kinds of asymmetrical relationships: the experience of growing up queer in a straight family and the geopolitical relationship Puerto Rico has with the United States.

"An extraordinary play. Cortiñas has crafted arguably the most intricately-detailed script to appear on a Humana bill in years." –Louisville’s LEO Weekly

Believe me, I know how this must sound. I started to write down the details of the episode. Not just the plot but its entire sequence, shot by shot. So at least there would be a record.

Then I realized how dangerous it was to keep a written record like that because of the risk that it could be discovered. So I decided I would have to destroy the written account and memorize the original episode. Recite it to myself when I was alone and carry the secret within me where no one could see it.”

OTHER TITLES IN THE SLEDGEHAMMER SERIES:

Jorge Ignacio Cortiñas's  most recent plays include Bird in the Hand (Fulcrum, New York Times Critics Pick) and Blind Mouth Singing (NAATCO, New York Times Critics Pick). His many awards include fellowships from the Guggenheim Foundation, the National Endowment for the Arts, the New York Foundation for the Arts (three years), and the Helen Merrill Award, among others. He is an alumnus of New Dramatists and a NYTW Usual Suspect.